Embark on the adventure of developing an application is not easy. To make this decision is very important to pay attetion to many elements. One of the most important is knowing for what platforms apps we want our mobile app, because according to this we will find different characteristics from one platform to another. This will impact on the customizations that have to be made for each operating system and, consequently, on the price of the app development.

Before you decide where you want your application is, we suggest you to do a study of the leading platforms for seeing in which you can get the best results. Before wanting to be on all platforms without need, it is recommended to choose those that best meet our demands. Then, and depending on the results, we can extend our mobile app and its resources to other platforms.

Currently, the most powerful platforms are Android and iOS, according to data collected in the report Q3 global market, and following by Windows Phone and Blackberry. Not surprisingly because of this, Google Play and Apple Store are the most active market places today, among other things, because between this two market places there are 2.5 million of mobile apps available. Behind of them are Windows Phone Store and Amazon Appstore, the latter overcoming Blackberry World that only has 130,000 applications. 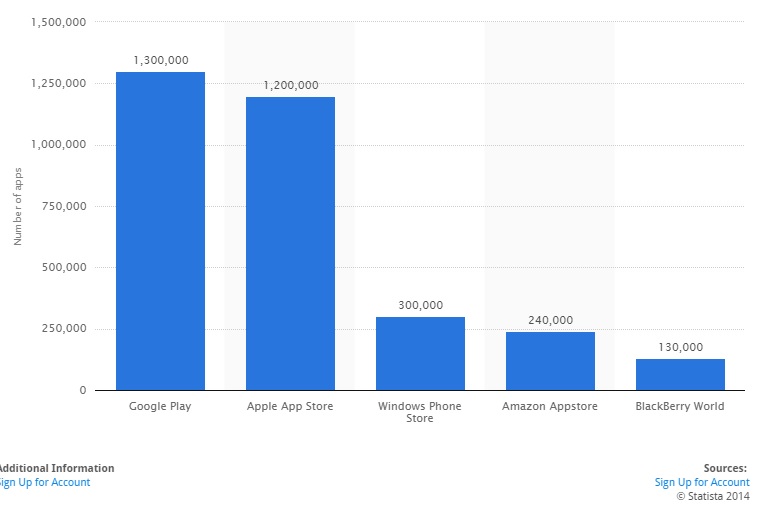 Considering all these data, is much more clear what platforms we will develop in the first part. Android and iOS are those that have greater presence in the world of apps so it is logical to start developing your app for these two powerful platforms and then, depending on the results, extend it to others.

Once selected platforms, the next step is decide what type of application we want in order to reach the maximum number of clients. Here it is very important that the developer of apps that you hire advise you of the best way for your platform application do not assume an exaggerated investment. Here we explain the types of applications available:

Smartphones consumers are the most demanding in the technology sector. We always want to have in our hands the best mobile with the best resources. That is why the native apps are a safe bet because they offer higher performance and better design adapted to the operating system on which the app is installed.

Perhaps this is one of the main reasons why developing a native app is more worthwhile. Although we assume a higher cost, we make sure to have an app of high quality because it will be developed in the native language of the device, offering greater usability and user experience, making use of the full capabilities of smartphone and offer the user experience expected of it.

Developing native apps is independent for each platform. This is why develop for the 3 major platforms (Android, iOS, Windows) requires developing in Java, Objective-C and C#. Usually an engineer will not be a specialist in all 3 languages and even less on the specifics of each platform. This mean that develop a muli-platform app in the native language will require as many engineers as operating systems we want.

While the cost is high, there will be companies can not affort this payment. This is the reason why exist other more economic possibilities, such as hybrid app or web apps, which may serve depending on the demands that the mobile app has.

Unlike native apps, and as we explained in the post of Web App, this type of apps is developed in CSS, HTML and Javascript, not in the native language of the device as the apps mentioned above. This makes that these applications are adaptable to any device regardless of operating system they use because it works through the mobile browser. Its development is cheaper but its only fault is that it doesn’t work without internet connection. They are optimized websites for mobile devices that are opened through the browser.

They are called hybrid because mixed properties of native applications and web apps. These applications are cheaper than the native app, but it is also true that they have many limitations unable to feed on all device resources. Although the last existing frameworks allow more functionality, it is necessary to be programmed in native language for each platform to some of them.

A hybrid application is programmed in HTML5, CSS and Javascript wrapped in a native application layer. As noted above, it is common use frameworks for these developments. The most widely used framework for developing such applications is PhoneGap. This framework uses a native wrap layer and provides access to increasingly native functionality, although, for example, employ push notifications would require a native development for each platform within the hybrid implementation. Hence its name, it mixes native development with web development.

An example of a native app with some hybrid part is Instagram, which uses native language to take and upload the photo and navigate and web resources to show our profile and photos uploaded by other users.

On the other hand, within this type of apps you can find a subcategory might be called interpreted applications. For this kind of apps the framework most used  is AppAcelerator. But … what is it?

This framework enables you to develop a multi-platform app in JavaScript language but transforming and compiling into native code at the end.

There are also frameworks like Xamarin that generates native code sharing in C# and translates for Android and iOS, but always requires customization of interfaces to other languages (there is a variant called Xamarin Forms that takes  6 months on the market and we will dedicated its own post shortly).

The interesting thing about these applications is that they reduce costs and partly also can take advantage of specific features of native applications.

And now, after this analysis, it’s time to choose one type of app considering the target of our app, what it will be its use and the available budget.

If you have any questions or want to advise on the development of an application you can contact us.